Littauer's The Vegetaria [photo and memory courtesy of Jayne Loader and Richard Kirshner]
​"It was taken by my father, David Richard Kirshner who was born in 1919 in the 125th St Harlem Hospital, and grew up at 2011 Grand Concourse, The Bronx. There his father, Issac was the Chazen and together with my grandmother, Flora, ran a thriving assembly hall for weddings and other ceremonies. By the late 1930s, as a technologically competent youth (radio amateur among other things) he was surely carrying around a camera and snapping pictures of street scenes.  I have a bundle of the prints, which look like they were commercially developed, maybe using a drug store as the agent.  This photographic practice he continued to the end of his life at 92, leaving a legacy of thousands of images, mostly banal, but sometimes revealing.  I don't have any knowledge of what he might have found interesting about that vegetarian place, but it is not beyond imagination that he was sent there to pick up a catering order.  Maybe some Trotskyites were getting married!" 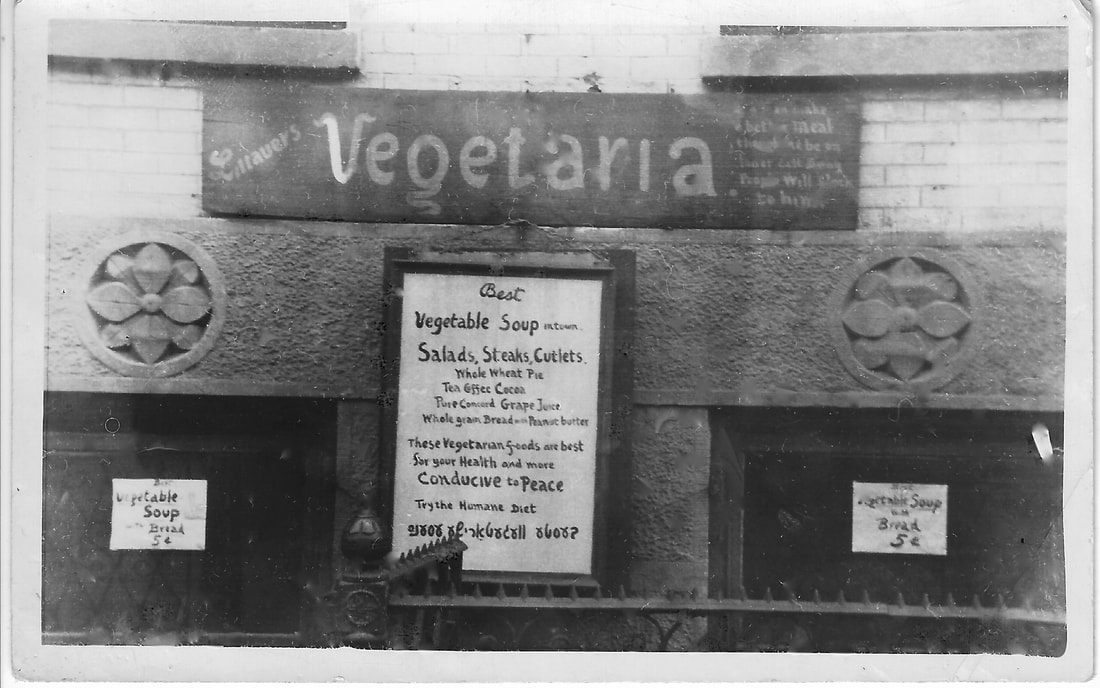 For more information on Moyshe Yitshok Littauer, the famous vegetarian activist:
​http://yleksikon.blogspot.com/2017/03/moyshe-yitskhok-litauer-m-i-littauer.html
On Harriet Littauer [information contributed by Matt and Ilene Binder]
On page 365 on The Dairy Restaurant, I mention The Tolstoyaner Vegetarian Restaurant at 28, and later 55, Second Ave. c. 1915. The proprietor was a Harriet Littauer. The Binder's help explain the connection of their grandmother, Harriet, to the various Littauer restaurants.

"Yes, that's my grandmother. I was in shock when i saw the mention of her name in your email. all my life i have been telling people about my grandmother's vegetarian restaurant and the stories that she told about it (including the protose steak) and you are the first that knew about it.  my cousin had seen either a menu or pamphlet from the restaurant at the different 2nd Ave. address (was it a lower number than 57?) around 7 years ago on ebay but it was sold before she bid on it.  My grandmother's name was Harriet Litwer when she came to the united states in 1906 at the age of 13, she stayed with an aunt who was a Littauer. My grandmother married another Littauer, who was a distant cousin [This was Moyshe Yitshok Littauer, ed.]. They initially had a vegetarian restaurant called Pythagoras on East Broadway. He was, I think ,a vegan because he never wore leather shoes. After you emailed me yesterday, I looked up Tolstoyism and they mentioned their followers didn't wear leather. Maybe he was interested in the movement and thus the name for the restaurant. They were only married for about a year but they remained close until he died many years later. I don't know if she was still married when they opened the Tolstoyaner at the first location but i find it fascinating to see her married name as the proprietor. she became Harriet Seligson when she married my grandfather and had the second location at 57 2nd Ave."