For an homage to a Philadelphia Mecca of Jewish Soul Food, please check out:  Alan Sandler's “Did you eat?” at: http://oneforthetable.com/Food-Family-and-Memory/did-you-eat-sp-18659.html.

On Dave Sandler, a counterman at the Ambassador Vegetarian and Dairy Restaurant
by his son, Alan Sandler
I’ve attached  [below] a picture of the Ambassador’s “Cast and Crew,” with my father 3rd from the left, second row. He’s dubbed a “waiter,” but was always behind the counter.
He was born in Lithuania in 1908 in a city (town?) that my grandmother called Zoslau, that I cannot find on a modern map. She was from Vilkomer. His father came to the America just before WWI, leaving my grandmother and 5 children, to wait, I imagine, until he earned enough money to bring them as well.
The War and the Russian Revolution got in they way, however, and she and the children, except for the youngest who died of malnutrition, survived harrowing hunger and deprivation, until they were able to emigrate in 1923.
I do not know what brought my father to the restaurant business. He had no formal education, spoke Yiddish with my mother, English with a Yiddishe accent, and corresponded in Yiddish with his older brother [Philip Sandler] in Manhattan who wrote for the Morgen Freiheit. Philip Sandler was active in the IWO, was a Communist sympathizer and activist and that the FBI had come to their apartment in Brooklyn while investigating my father, and as a result, the two brothers, chose not to meet or speak with each other.My uncle, Philip (perhaps my father as well) was, according to his daughter,  sadly disillusioned and grieved all that he had given to the cause when he discovered the truths of Stalin’s Communism. In his anger and grief, my uncle quit the Freiheit, worked in the garment industry, and eventually joined the staff of The Jewish Daily Forward where he worked until his death.

David Sandler was a union man (Restaurant Workers???), a member of the Hebrew Waiters Beneficial Association, and the Workman’s Circle (Der Arbiter Ring), a very left leaning “socialist” labor organization. His activities must have been on someone’s radar (FBI, McCarthy) as  I recall seeing while (confession) nosing around in my parent’s night table drawers, a notice from the Congressional Record that the order to deport the following individuals had hereby been rescinded, on the list appeared my father: David Joseph (Josele) Sandler.

Ours was not a Kosher home, and the, perhaps apocryphal, story was told of their partying on Yom Kippur, until they discovered what Stalin was really up to, gave up Communism, and found religion: Conservative Judaism in our case.
He worked hard, rested on his days off, traveled very little if at all, never drove, and when we went out to eat, it was to the China House Restaurant: Egg Rolls, Shrimp in Lobster Sauce, Egg Foo Young, Barbecued Spare Ribs, Wanton Soup, and Chicken Chow Mein.
Were we comfortable? We had enough food, my mother did some seamstress-ing in the home, darned my socks and underwear, and scrimped and saved. I began an eight year career as a Soda Jerk when I was 13. That is the closest I got to the restaurant business and it was on my way to the “ordained” career in medicine that my parents wanted for me. In his, perhaps envious, moments, when he felt I may have crossed him in some way, he would say: “Look at you, Big Professor. I sent you to college but you have no common sense.”

I left Philadelphia in 1970 for my internship in Los Angeles, and the following year, I brought my mother and father to the Coast to meet my new girlfriend, now wife, and to see the sites. It was the longest trip either of them had taken since coming to America, my mother from Ukraine, and they had a wonderful time in LA and in the Bay Area. They returned home, and a month later, November 1971, he died of heart disease with which he had been struggling for sometime.

​A simple view of parenting is you give what you got, good and bad,  and you can’t give what you didn’t get, and if you owe a debt to your parents, you repay that debt to your children. My father endured and sacrificed and gave me what he had, and would be proud, I expect of how I’ve repaid him.  -Alan Sandler 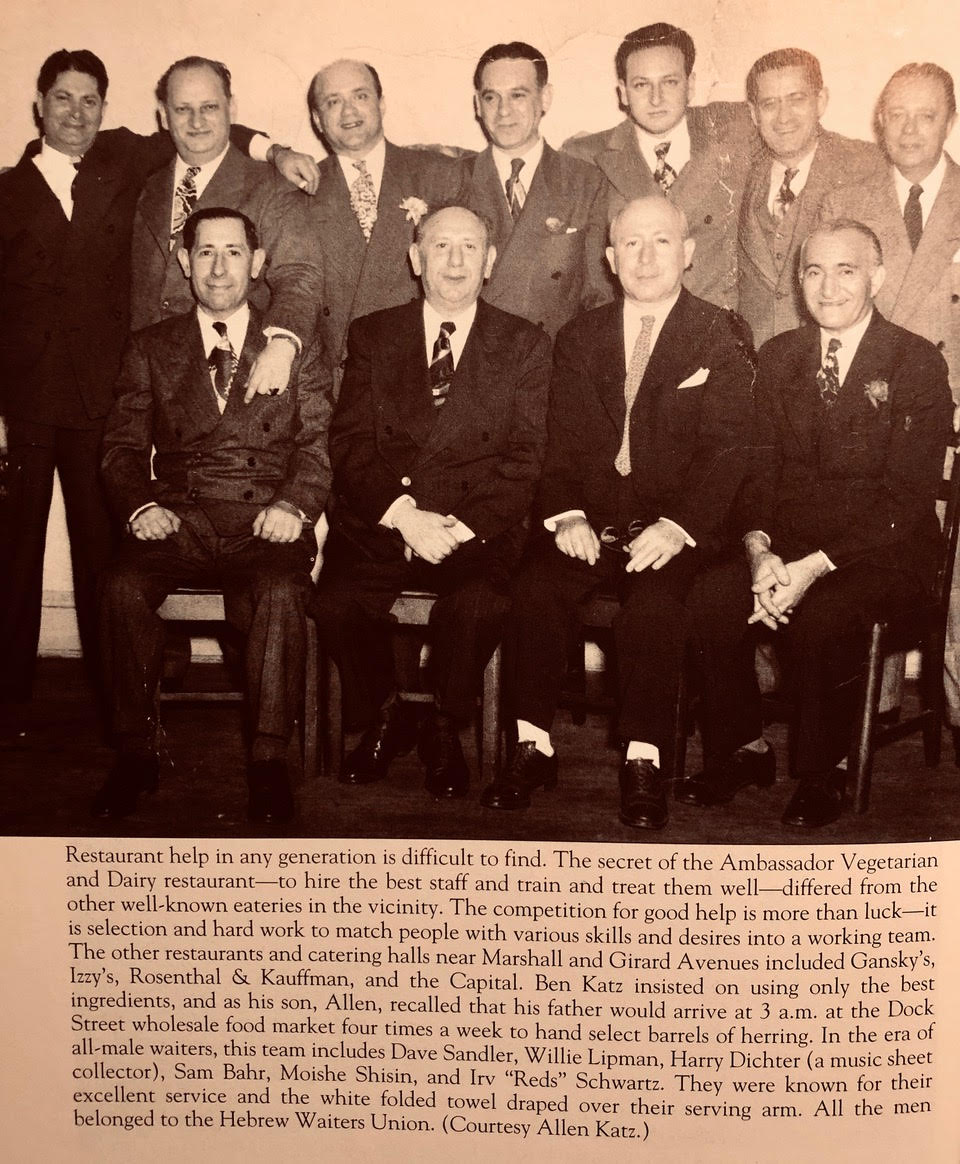 photo from The Jewish Community Around North Broad Street by Allen Meyers
Memories of the Ambassador Vegetarian and Dairy Restaurant -  Jack Stutman
"I am a second generation Russian Jew, whose grandparents came to the United States in the beginning of the 20th century because of all the pogroms going on in Czarist Russia at the time.
When I was growing up in the 1950"s in Oxford Circle, an all-Jewish neighborhood in the northeast section of Philadelphia, my family used to go to a Jewish dairy restaurant at 6th & Girard in North Philly.  It was always filled with older Jews like my zaida, who only spoke Yiddish, a language I had an elementary understanding of since I spent so much time with him.  At one time or another I ate just about everything you described in the review.  They even had a vegetarian hamburger which I tried once, but didn't care for.  What I found amazing was that one of the waiters was an African American who spoke Yiddish as well as anyone in the restaurant and always enjoyed listening to the conversations my zaida would have with him.  Eventually the restaurant and the Jewish neighborhood that surrounded it was torn down as part of a redevelopment project.
Now I move ahead to the early 70's when I was beginning my 40 year career as an elementary school teacher/reading specialist and all the school strikes we went through during those times.  Since the school was a hop, skip and a jump from the aforementioned dairy restaurant, after picketing, especially in the winter time, I would take a bunch of my fellow teachers there to warm up and have their delicious bowls of vegetable soup and all the rye bread with cream cheese you cold eat as we didn't have much money because we were on strike for up to twelve weeks at a time.
The reason I wrote is that reading the review [of The Dairy Restaurant] brought back memories I hadn't thought about in decades, memories of my Zaida, who people told me I was exactly like, and all the life long friends I made at my first teaching assignment when we were all young and full of all the energy and excitement at trying to find as many ways possible to have a good time as all young people have at that stage of their lives when everything is possible, who have all passed away now.  I am the "last man standing" from that group.  Thank you for bringing back those memories to me.  Now as an old man, they mean a lot to me.
Yours truly,
Jack Stutman
The Ambassador Vegetarian and Dairy Restaurant.
Melissa Stern
My mother grew up at Third and Girard, a few short blocks from the restaurant. She had a fairly miserable childhood. Born to Jewish immigrant parents who barely ever learned English, she lived a life of deep poverty and frustration. Her father made bicycles. That is, he built them from found parts during the Depression and sold and repaired bikes in the subsequent decades.  The family lived above and behind the store. All my mother wanted to do was to draw and make beautiful things. Her home was drab, infused with the grimness of poverty. The Ambassador, though physically  three blocks away, was a light year away for her. I’m not sure that they ever ate in a restaurant her entire childhood.  She wanted to go to art school, but instead went to work at Woolworths right after High School. Fast forward a couple of decades- my mother had made a successful career for herself in illustration and advertising- based solely on raw talent and will power. Going back to Third and Girard to visit her parents was a psychologically fraught experience. I remember my aged Russian grandparents well, they were figures from another Universe to me. Kind, but they never really became Americans and thus,  I was a foreign creature to them. My father was raised Workman’s Circle and, though not at all religious, he relished in everything Jewish and cultural. His Italian-Jewish grandmother had raised him with a great love of food and The Ambassador was one of his favorite restaurants. My mother refused to go there. It represented everything that she had worked for years in analysis to free herself of.  So it became the place that my father and I would go together. Not secretly, my mother had no issue with us going there. I spent many wonderful meals with my father at The Ambassador; eating blintzes and learning about history. My father had a photographic memory and regaled me with tales of his life ( being the only Jewish kid in a tough Irish neighborhood),  folktales, politics- whatever was on his mind. My memories of The Ambassador are deeply entwined with those of my father. And those memories are delicious.
- Melissa Stern