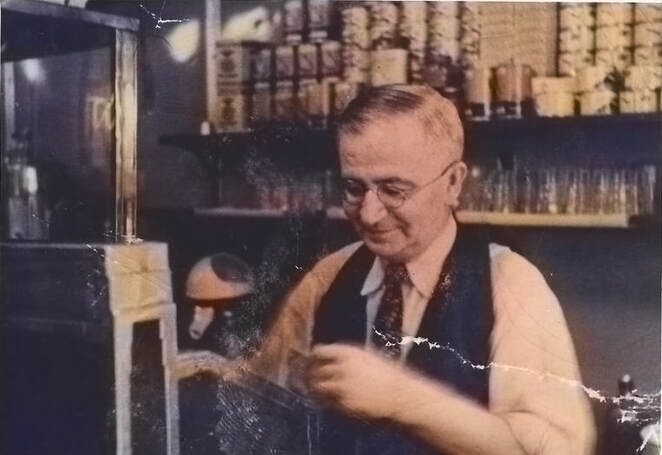 Hyman Zucker. photo courtesy of Alan Zucker
G&Z Bakery and Dairy Restaurant. 232 Delancey Street corner Willet Street
Memories of Alan Zucker.
"The attached photo is my grandfather, Hyman Zucker, who along with his wife , Celia Klinger Zucker, owned the G & Z along with Jack Goldstein and his wife, Rose Klinger Goldstein (Celia's sister). They split 12 hour shifts every day [The restaurant was open 24 hours a day]. This dairy restaurant attracted interesting characters, especially during my grandfather's late shift, He was a very sweet, honest man who was trusted by some  very nefarious characters from that neighborhood–Jewish gangsters. The restaurant was never robbed as it was well known as a special place.  Men from Murder Inc. were among his regulars and were great tippers and never created any problems.  It was their  "comfort" place to have very early morning meals.  As a young man, my father, Julius Zucker, was a waiter there and he knew many of these people.  They were all "landsmen" and  there were never any issues with them.  It was their safe space. The police never intervened there . . . sort of an off-limits site. The recipes were from my grandmother, nicknamed Chippy or Chipa, who cooked some  Jewish favorites - soups, blintzes etc. My grandfather  was a very kind person who often fed some of the indigent people in the neighborhood. I came to knew this after he died in 1961 when people approached my grandmother and expressed their condolences  and thanks to him for his kindness. I witnessed this as I lived with them during my high school years.

​The Goldsteins and Zucker came to America from Poland and initially were in the clothing trades until they had enough money to get into the restaurant business. They all retired in the early 1950's and continued to live in the Lower East Side on East Broadway.

I never saw the G & Z itself. By the time I lived with them, it was gone. I lived with them as a teenager (1961-1963) when I attended Yeshiva Univ. HS in Washington Heights.  I lived with them on weekends. They originally lived on 1-3 Scammel Street ( no longer there) across the street from a triangular public park where East Broadway meets  Grand Street. On Shabbos, my grandfather would take me to different shuls to experience the cantors and people that were part of that  unique scene. Because his restaurant was so well-known, he was approached by many in a very kind and wonderful way. It was a very warm and social environment .  There was an ambience there I cannot quite capture in words. The confluence of languages that I heard was a cacophony of Eastern European musical rhythms . The synagogues themselves were packed and the  Hebrew melodies echoed through the galleries where the women were sequestered. I miss hearing those sounds. Especially on Shabbas, the streets were filled with people taking a stroll to the East River in their best clothes ad it made quite an impression on me as a boy.   On the high holy days when people observed Taslich ( throwing bread in to East River), the streets were a river of people. There was a vibrancy there that have never since then experienced ...a special place in time for people who were lucky enough to escape the hunger, poverty,  war, and anti-semitism of  pre WWI Europe  and live in peace in what they  all called "a goldena medina".

The G & Z, along with other such establishments , were a bridge, really a life-line-for one generations to allow others to grow and proposer in safety and peace. I owe them everything. In later years when I interviewed my grandmother about her life, I was awed by the courage, determination, and luck that generation had. The details of life before, during and after their arrivals, keeps me humble and grateful. And I wonder about those who either refused to or could not make that same journey.

I do not mean to overly romanticize the times ands places , but my recollections are from what was an impressionable teenager who had entree to a world that is long gone and was warm and welcoming to me . It was my great fortune to have stumbled into that time capsule of Jewish history ." 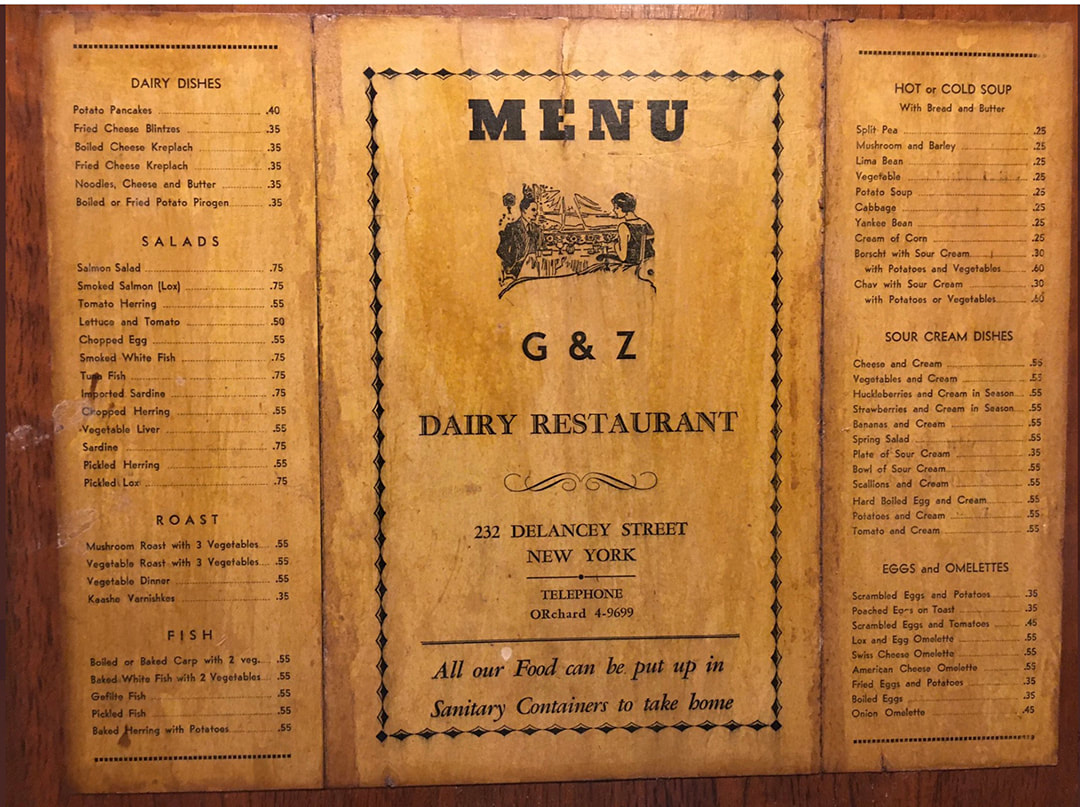 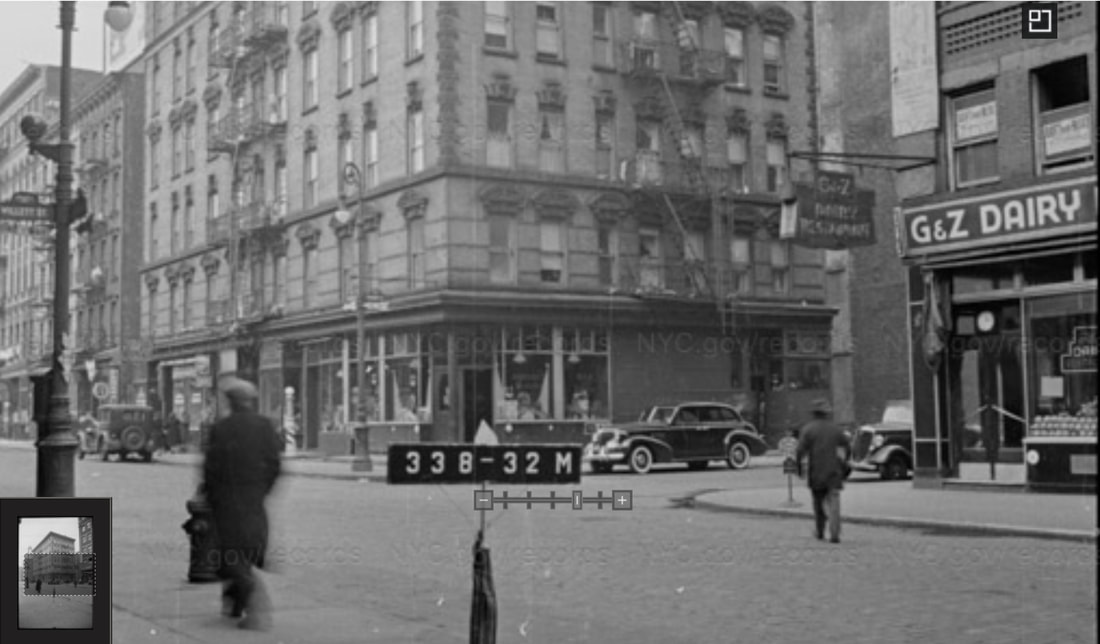 232 Delancey Street at Willett St. location c. 1940
Comment on G&Z Dairy from Irving Feldman.
Marvelous the G&Z photo. I moved to 67 Willet Street on 1 Jan. 1947 (from 160 Orchard, where I lived in Jimmy Baldwin's apartment; also there for a while: Mason Hoffenberg), my stuff on a rented pushcart with Nancy Banks (later Bellamy) helping. I believe I remember G., but not Z.
(I told you B & Z. Glad I got the Z right.) Their vegetable liver was first rate. Mr G. was short, stocky, blond hair combed back over a bald spot, with steel-rimmed glasses, blue eyes, and calm, friendly disposition. Don't recall Mr. Z. or the wives.

Samuel Seiler, born June 20, 1886 in Sambor, Ukraine – died November 1978
Came to NYC at age 17 alone, later brought family. Started out selling potatoes in the street.
There exists a document of sale dated October 14, 1914, with Max Parnes, a well-know dairy restaurateur (see The Dairy Restaurant, page 362)  for his restaurant and its contents at 116 Rivington Street. Included are "6 tables with marble tops, thirty-four chairs, 1 National Cash register, one show case with ice box, one coffee urn, one coal range, the good will of the business and lease covering the groceries and canned goods and all other goods and chattles belonging  to said business and contained in the premises." This may have been Samuel’s first restaurant ownership.

Samuel married 1915. His wife was not active in restaurant.

On, or around, June 11, 1925 an ad in the Forwards announces the opening of Klein, Seiler & Teper's Dairy Restaurant (Garfein’s Dairy Restaurant) at 217 E. Houston. Partners were Charles Klein, Samuel Seiler and Jacob Teper.

Stories: Someone came in and advised Samuel to leave his safe open as a robbery was planned and he could thus avoid violence.
At some point Samuel was a parter in a non-Kosher Chinese restaurant in the Borscht Belt. Samuel went on to run The Imperial Gardens, a popular kosher catering hall in the Bronx with 5 dining halls (2 large ones on the second floor and 3 smaller ones on the first floor). They offered Yom Kippur services. The kitchen was run by a woman chef, and continued with second woman chef, Diana.

In 1933, the 217 E. Houston space became was a tombstone showroom and in 1993 became current The Mercury Lounge, a music venue. 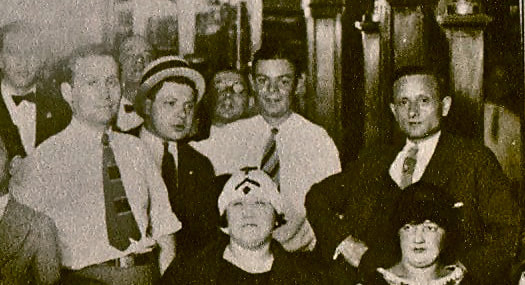 Please note that the name is pronounced Mei, sounding like My rather than May.
The Meibach family had several dairy restaurants, one at a time, in different neighborhoods in Manhattan and Brooklyn. The one my dad told me about was on or off West Houston Street.  It was run as a cafeteria  during the depression. Eventually the family went into the catering business, having halls in Brooklyn, Manhattan and the Bronx. By the time I was born the Meibachs were in the catering business, so I never visited the restaurants.

Once, when  my parents, sister and I were at Rappoports a stranger came to our table asking if we were the Meibachs.  He guessed by looking at my sister who was the spitting image of our aunt and he remembered the restaurant.


Sarah and Jacob and Rose had emigrated from Austria.There were five children - Ann, Rose, Gussie, Lou and Aaron [Doris's father]. Rose, the eldest, ran the restaurant with my grandparents Sarah and Jacob Meibach. It was an orthodox family, totally observing kosher laws.  To my knowledge they we’re Democrats. My mother’s mother read the Forward; I don’t know about Sarah and Jacob's preference.


During the Depression the Meibachs had a cafeteria at 597 Broadway in Manhattan.  That building still stands I believe. My dad is Aaron Meibach, born in 1910, the fourth child of five. Of course they spoke Yiddish but, I believe, English was the primary language. The catering halls that I know of were one on East Broadway, in Brooklyn - the Imperial Mansion and the Empire Manor, in the Bronx, - the Burnside Manor. The family lived in Brooklyn (Williamsburg & Bensonhurst & Flatbush)  and the Bronx.
By the way, I loved Rappoports and I still go to B & H.
- Doris Wallace 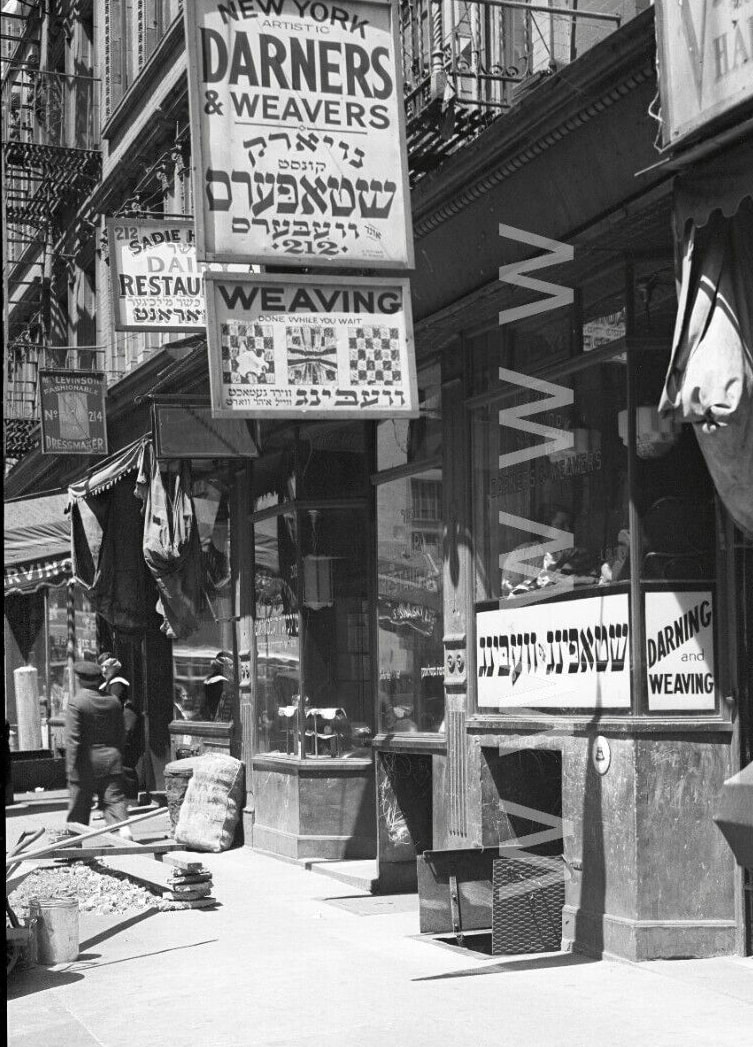