The Famous Dairy on Eastern Parkway see page 398
Memories of Lawry Bluth
The story of Abe Bluth's departure from Europe (appropriate for a Passover tale).
​My family lived near Jeszow in Poland prior to World War One. Poland was carved up in the Eighteenth Century and reportedly the area was the site of a Russian Army encampment. My grandfather was a land agent for one of the Polish royal families, the Potocky’s. My grandmother, a tall strong woman, had 12 children and kept up the family business, which was a tavern located on the end of the road closest to the army camp. There was another tavern at the other end of road. On a Sunday, when the blue laws prohibited businesses from being open, including taverns, a Russian soldier who had gotten drunk at the other tavern, staggered in to the Bluth’s demanding to be served. My grandmother asked if he had any money and the soldier answered no. She refused to serve him and the soldier got into a fight with her. She was having the best of it, when the soldier started to bite her. She shouted for her oldest, Paul, age 14, to help her. He was always mild mannered, but at about 6’2 very strong. He picked up the drunk soldier like a beer keg and carried him outside and threw him over a fence into a pile of manure. This would have sentenced Paul to the Czarist army with his thumbs cut off. In fear of that, he left that night and made his way across Europe to America. He went to work as a busboy in one of the dairy restaurants on the lower east side (sadly, I never learned of its name) where he met his first wife, Kate, a cashier, who wouldn’t marry him until he owned a business. Thus the foundation of the various Famous Restaurants  in then up and coming middle class Brooklyn.

Another story. The Famous on Eastern Parkway adopted a rule in 1956 of prohibiting politicians from “campaigning” in the restaurant. That was because on Mother’s Day, 1956, the busiest day of the year because the suburbanites came back to take their mothers out for a good meal in a first rate place, the Madison Club, then the powerhouse of democratic clubs in NY State (then led by Stanley Steingut, minority leader of the State’s Assembly, later Speaker, and numerous other important Congresspersons, Judges, ) decided to walk then Governor Averill Harriman, into the restaurant to meet the locals dining.  Customers waiting to be served formed lines out the door, which was traditional at The Famous on that holiday and others. I was there. He was walked around the tables and created quite a scene, this handsome, legendary patrician, inheritor of the Union Pacific Railroad and confidante of Eleanor Roosevelt. So much so, that more than half of the dining patrons marched out with the political entourage, omitting to stop to pay the checks. Thus, no more politicians campaigning at The Famous. The other thing that I was taught at the restaurant, never to sit with your back to the cash register, a rule that I maintain to this very day.

You had to be at The Famous (as it was then known to distinguish it from the 13th Avenue and the 86th Street cafeteria versions) catering  hall attached to restaurant to see Ernie Mann and his one man band perform. He had an accordion, a harmonica and a cymbal of sorts, a kazoo like instrument, drum sticks, a clarinet and he had a glass and a spoon to use to perform a rousing rendition of “Roumania Roumania.” 4 hours for about $100 dollars. Weird Al Yankovic could have learned something. Many more tales as one looks back. By the way, some of the catering hall guests thought it was well within their rights to not only walk out with the flowers and unlimited freshly baked rolls, but also the electric silver punch bowls. To them, paradise was all you could capture in an evening out. 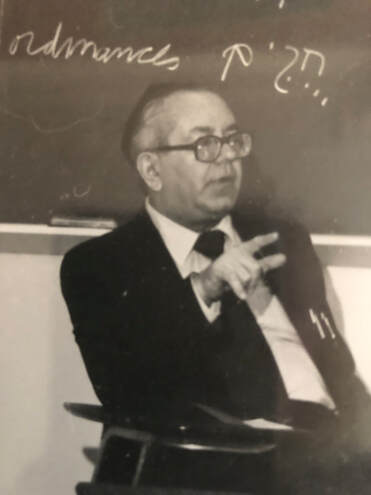 Rabbi Kurt Klappholz
Rabbi Kurt Klappholz dines at The Famous and other dairy restaurants.
Memories of Ruby Klappholz Newman, his daughter.
Dairy restaurants have pride of place in my family lore as my parents had their first date at a dairy restaurant [most likely The Famous, ed.] on or near Eastern Parkway in Brooklyn. My father, Kurt Klappholz, a young Berlin-born rabbi who arrived in NYC in April of 1938 to perform a cousin's wedding, and my mother, a Kindertransport child who arrived in NYC in 1942 after spending about four years in London had known each other in Berlin but reconnected in Brooklyn. As the story goes my father, who had a sweet tooth, ordered cheesecake for them both. It would not have been my mother's choice but she ate it and the rest is history. They were married a few months later.
My father worked at a yeshiva in Borough Park, Brooklyn, in the nineteen fifties and often ate his lunch at a dairy restaurant on 13th Avenue [likely The Famous at 4818 13th Ave., Ed.] or, if he had meetings in the city, at a favorite restaurant [name unknown, Ed.] in the garment district. He proudly shared his status as an ami de la maison with us, joking that as soon as he entered the proprietor would shout to his staff: get out the lump sugar, the Rabbi is here. lump sugar was wrapped individually in thin white paper and to this day when I see sugar cubes I think of my father. ["vprikusku" or drinking tea through lump of sugar held in ones mouth. eed.]
When my sister was born in July of 1952 my mother remained in the hospital for a week (Israel Zion; now Maimonides) in Borough Park. My father took my brother and me to lunch every day at his favorite dairy restaurant on Thirteenth Avenue where he ordered protose steak (a prehistoric veggie burger) smothered in what must have been mushroom gravy. It was not to my taste as a child but the scoops of mashed potatoes and peas are among the happy memories of my childhood.
Wishing you all the best.
Ruby Klappholz Newman