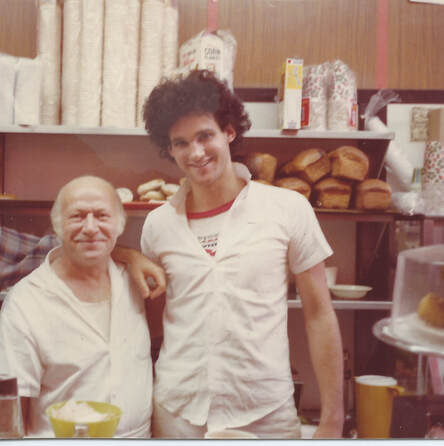 Dave Schornstein and Bob Sloan.
Memories from Bob Sloan
Here's me when I worked at the B&H. My first job out of college – 1978. Dave [Schornstein] and I got along famously until he took umbrage at the attention I was getting and fired me after a few months.
Besides being my first job, the B&H was where my uncle Burt (who owned the Village Gate) took me when I was visiting the city for the first time on my own fifty years ago. Burt was a regular. They cleared the cooling challahs off the back table so we could sit there. Leo [Ratnofsky] the counterman was still working alongside the racist/sexist Dave whose wife, by the way, was black and picked him up in a caddy convertible at the end of his shift. Leo was featured in that lovely piece in the New Yorker about countermen. He left the B&H to go to the Grand Dairy where Uncle Burt and I visited him.
Whenever someone ordered pea soup, Dave would announce "Hold the chicken, make it pea!"
​Another uncle, Uncle Jack's, favorite spot was Hammer's Dairy on 14th Street which had beautiful wooden booths and actually nice waiters. The food was a little more refined than the B&H. It was also across the street from Movie Star News.
I was many times at the Famous [72nd Street] and sought out all the Dairy Restaurants I could back in the city in the 70's.
- Bob Sloan


A memory from Mel Miller
About 30 years ago [c1990], a friend of mine and I would bicycle from the UWS to B&H.  I favored the French Toast, he was a Barley Soup guy. I don't remember the name of the gent who ran the place then, but when it got too crowded or too noisy, he lit up the biggest, smelliest cigar in creation.  That cleared the place of "riff-raff".


Memories from Marty Schiffenbauer
“In the early- and mid-1960s, I was a graduate student at NYU and lived in a small studio apartment on East 10th St. There was no kitchen in the apartment, just a hot plate and small fridge, so I mostly ate out at local restaurants. My favorite by far was the B&H Dairy on 2nd Avenue, about a 10 minute walk from my apartment and open from very early morning, if I recall correctly, to midnight.
“A narrow, cramped space with 13 counter stools and a few tables, the B&H still managed to offer an extensive menu of meatless and thus presumably kosher cuisine. Among the specialties were blintzes, pirogis, kashe varnishkes and eggs scrambled with lox and onions. But, mostly, I stuck to the soups. A large bowl of mushroom and barley soup, my standby, came with two thick buttered slices of their legendary challah and at the time was an incredible bargain at just 50 cents. Along with the hot soups in the summer the B&H would serve a cold shav (sorrel soup) topped with sour cream that I would look forward to the entire year.
“The two main B&H counter men at the B&H were Leo and Lenny. I remember that you never got a check. When you finished eating you went to the register near the front door and told whoever was the cashier, usually Lenny, what you had ordered and you were told what you owed. I always left a tip as I knew that whenever anyone left a tip Lenny would yell out something that sounded like “Sharkey.” As a regular, I eventually discovered that “Sharkey” was actually meant to be “Jockey” implying the tips would be used to bet, probably with a bookie, on the horse races.
“Another B&H tradition I remember was that when a patron asked for a suggestion on what to order, they were served an unappetizing corner piece of kugel or something else unappealing. When the patron complained, he or she would be told that if they didn’t like what they got they shouldn’t have asked for a suggestion.
“My devotion to the B&H continued even after moving permanently to Berkeley in 1967. In fact, in one of my recurrent nightmares, I am on the flight back to Berkeley after a visit to New York and realize I had forgotten to go to the B&H for a bowl of soup. In reality, I’ve always made sure to drop by the B&H when in New York and was distraught when the B&H temporarily closed in 2015 because of a gas explosion at a nearby building. Thankfully, with the help of loyal patrons who launched a crowdfunding campaign, it was able to reopen.
“On one New York visit, in 1978, I was joined at the B&H counter by my cousin Arthur and his buddy, Stanley Mieses, both also big B&H fans. Stan was then a contributor to The New Yorker’s “Talk of the Town” and I suggested he write something about the B&H to commemorate the retirement of its beloved counterman, Leo, who began working there in 1940, two years after the B&H’s opening in 1938. (I’m delighted that the B&H’s birth year is the same as mine). Stan followed up and his B&H profile appeared in the New Yorker issue dated May 15, 1978. Below is an excerpt quoting the retiring counterman, Leo Ratnofsky and a link to Stan’s B&H profile:
“I’ll tell you truthfully – I don’t feel bad about leaving the place. I’ve got bad feet, my fingernails are being eaten away from squeezing oranges. But to leave all these people – that makes me feel like crying. These actors and actresses, the hippies, the yippies, the beatniks, the bohemians, people who’ve run away from God knows where – I’ve always had an attraction to them. Especially the starving ones.”
http://archives.newyorker.com/?i=1978-05-15#folio=028

A memory from Todd McEwen
In 1976 I began work at the Public Theater on Astor Place and my colleagues and I ate lunch at B&H at least twice a week. My friend Bill Dreisbach was devoted to the matzo brei - something I never quite learned to love with abandon - while I became addicted to the split pea soup and challah (also the yankee bean) and I often availed myself of the important-sounding 'individual tuna'.

I remember Dave and his sidekick at the time, Leo. I wrote a play about them (happily it no longer exists - it would have played at about five hours). When anyone asked where the toilet was, Dave jerked his head toward the rear and often followed this with 'Mention my name - you'll get a good seat.' Dave and Leo had two phrases for tips - 'jumbo jockey' and 'double jumbo' - 50 cents?
- Todd McEwen

Memories from David Gurin
I grew up in Boro Park, Brooklyn and my family would go to the Famous Restaurant on 13th Avenue once a year, on the evening before Passover, because my mother has already cleared the house of chometz. So we had our last chometz meal there and started on matzoh the following morning. Once or twice a year we would also go to Rapaports or Ratners. From 1963 to 1973, I lived on East Third Street between First and Second Aves., and then on East Fifth Street between Second Ave. and the Bowery. I ate at the B&H a few times a week, mostly the 35 cent bowls of soup with lots of filling challah. The price may have gone up to 40 cents before I moved away. There was a kind of continuous and somewhat comic debate going on behind the counter about the anti-war demonstrations of the period: the debaters were one tall left-wing Jewish counterman with a sense of humor and one short right-wing Jewish counterman, who was dour and angry most of the time. I’m not often in the neighborhood, but when I am I usually stop in for a bowl of soup, at a price some serious multiple of what I used to pay, and served by distinctly non-Jewish countermen whose political allegiances are not known to me.
- David Gurin
P.S.: Now that I see the photo of Dave Schornstein, I realize it was he who tried to convince me, many decades ago, that B&H stood for Baruch Hashem!

A memory from David Smith
I wanted to share a story about Dave Schornstein at B&H back in 1976. I was at the counter when Dave leaned over to confide, sadly, to a person sitting next to me that his mother in law was in the hospital. The person said something like 'that's too bad Dave, what's wrong with her?' Dave replied 'she sat on a jelly doughnut and got her ass in a jam'.